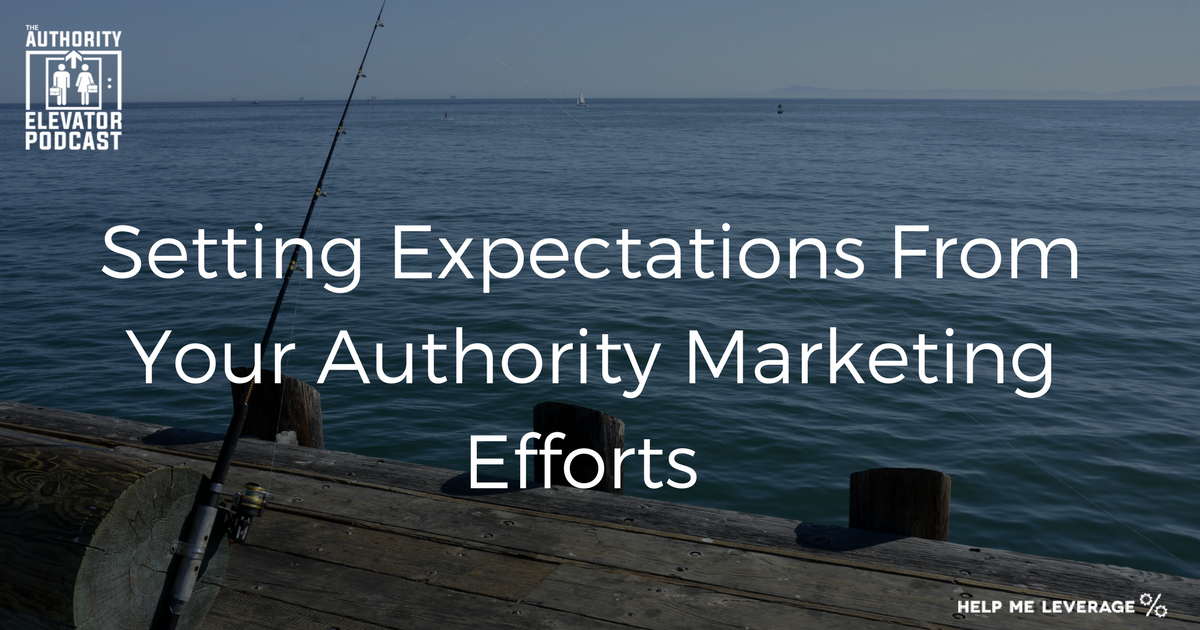 Marketing and sales is a numbers game but often we pursue the wrong numbers. Social media In particular often diverts our attention from the real game, making sales, to a false game, chasing likes and shares, etc.

Likes and shares are great but in and of themselves they are meaningless. Hence why they are often referred to as ‘vanity metrics.’ And for a consultant or coach looking to build a business, they can often be a distraction. The prospect of something going viral and creating a flood of leads may sound attractive, but for most consultants or coaches, a flood of leads isn’t actually what you need. A handful of leads can often be more than enough up until you are truly ready to leverage.

So why bother with authority marketing at all then?

1 - It helps you build a body of work that establishes you as an authority; and
2 - It sets you up for when you are leveraged and ready for a flood of leads.

Brett Jarman: Welcome back. And if it's your first time listening to the Authority Elevator, welcome aboard. Let's hope you take things to the next level or beyond if that is your choice, your wish.

The whole content marketing landscape - it's changed dramatically in the last say five or ten years. Blogging and podcasting - all these things were fairly new. There were only a handful of people doing it. Now I won't say every man and his dog are doing it. I would say it's less than one percent of the population, I would guarantee it is less than one percent of population doing either of those things. So even though it's not every man and his dog, there is still a truckload of people who are vying for attention on the internet landscape, whether that's through podcast, video, social media, so on and so forth. The amount of people who are trying to grab our attention has increased dramatically.

Marketing and sales is a numbers game but often we pursue the wrong numbers. #authoritymarketing #contentmarketing #inboundmarketing #marketing

Now that doesn't make it a waste of time now because, at the end of the day, you actually don't need to reach a lot of people with your authority marketing efforts in order for it to be successful.

So one of the first things to look at with your expectations is to avoid what are often referred to as the vanity metrics. So if you're thinking that the number of followers you have on your favourite platform is critical, yes it's useful but it's not actually that critical. If you are looking at each post and fretting or otherwise about the engagement, by engagement I mean things like likes or shares or on Twitter or it might be retweets. If you're pinning your hopes on high engagement and that's not happening, it's not necessarily a reason to be disappointed because it's about more than the vanity metrics. If we can get those things that's well and good.

And that's not to say that they're not worth striving for and not worth putting... It's certainly worth putting in some effort and trying some strategies that might increase your engagement. But it's not the be all and end all of authority marketing. And the thing is as you develop, as you get more resources, that's when you might want to put some attention on that sort of thing - hiring VAs or search engine optimisation experts or a dedicated social media team to run those sorts of things.

But for now if you're posting and it seems like you're only getting a handful of people commenting and liking, it's not because they don't like your stuff. It's because people are so busy, they've got so many people vying for their attention that they just don't have time to sit and scroll through parts and read them as in-depth as they would like to. So don't be too concerned about your vanity metrics.

What really matters I think with authority marketing is, number one, that you are creating a body of work that is visible to people. And I hope and I pray that you are doing that on your blog first and foremost and on some other platforms. I've talked earlier about using, having you know two or three primary platforms, so that might be LinkedIn, podcast, YouTube, whatever that might be. But it is so important that you start assembling a body of work so that when someone comes, when it comes time for someone to stalk you, for want of a better word, to do research whether you've got the goods, whether you're a person of substance. That's where they're going to go to do it.

So that's the importance of a body of work as it gives you a reputation, substance. The other thing that matters more than engagement out of your authority marketing efforts are the fact that you're getting leads. Now if you're a what I call a high value expert, so you might be a consultant, you could be a speaker or an author, whatever that might be, chances are you actually don't need a high number of leads to convert to business.

So avoid the temptation of all these offers from Internet Marketing sites guaranteeing you a flood of leads for this and that. It's actually not necessary. You really only need a handful. I've mentioned in previous episodes that will likely come from your first or second, maybe even third degree connections. So it's someone who either knows you or has heard of you or is in contact with someone who has heard of you and your name sort of trickles through to them.

So initially with your authority marketing efforts you're probably only going to get a trickle of leads, may only be one or two a week. But that's not to be scoffed at. And over time what you find is that the trickle will slowly become a stream. In due course it may well become a river and occasionally it might even become a waterfall of leads, like if you happen to write a post or do a podcast episode that's shared by someone who is an influencer and it goes viral for whatever reason.

Or maybe you strike a chord with your audience and they can't resist sharing it with others. That's the sort of activity that might create a river or a waterfall of leads. But don't set out with that as your intention, your initial intention from your authority marketing efforts. Well actually, no, I take that back. Set it out as an intention, but don't set it as an expectation 'cause you're sure to be disappointed, absolutely sure to be disappointed.

If you really do need a waterfall or a river of leads and you've got capacity to service a high number of leads, then you might want to consider advertising, whether that be Facebook or Google or even LinkedIn advertising depending on where your audience is. So that's when you really need high volume of leads. That's one of the avenues for you.

You could also obviously look at partnerships with other people doing joint ventures and those sorts of things. But just in terms of the pure marketing side of things, manage your expectations relative to what you're putting into it. 'Cause at the end of the day your lead flow needs to be relative to your lead nurture capacity. So I just mentioned a few moments ago, if you are a consultant or whatever that might be, you could probably only, maybe you're only doing two or three jobs at a time, and possibly even one. So you know out of ten, you have got ten people on your database, chances are that one of those could become a customer. So you're not after numbers with lots of zeros on the end at this point.

That's what I want them to want you to consider the focus of your authority marketing to be. At the end of the day, authority marketing - it's a conversation starter. Think of it like that. Don't use it as a tool to make yourself famous. If that happens, well and good. And it may well happen in time. It may well happen quickly but don't launch yourself into it expecting it to happen straight away. Use as a conversation starter.

But there is a point where it becomes human dependent. So you use your authority marketing to lead people to that point where you’re gonna have one or two or maybe three conversations in order to close a sale rather than having to prove yourself from the start. So that wraps it up. That's all I wanted to say about managing your expectations. I see a lot of people who launch into their authority marketing or concept marketing and because they don't get traction, they don't get those vanity metrics happening early on they think that their activities are not working. That's not the case. Let's give a little bit of time. Notice that you will get some leads coming through. And that's the most important thing. Okay, that's it for now.

We'll let you know via email when we release new episodes

How To Reach The Right People With Your Authority Marketing Efforts